Our volunteers have continued to come and help maintain the garden over the winter months and although our winter season volunteer sessions are not as regular as during the summer and autumn months due to the weather, it has been great fun to meet up and continue developing our Paradise Garden.

We were still harvesting veg in early November due to the exceptionally mild weather! November and December proved to be a good time for tidying up the garden and pruning back the hedges and borders, picking up any litter and clearing decaying matter and dead leaves.

During December and January we planted a variety of Spring bulbs which we purchased from Roger of Pickering’s fantastic family run nursery in North Yorkshire which specialises in traditional and organic methods of growing fruit trees and ornamental and naturally indigenous varieties of shrubs, trees and flowers.

A Naturalising Collection: We chose varieties of Crocus, Aconites, Bluebells and Fritillary, various Alliums including the ‘Stipitatum and ‘Vineale’ varieties and the ‘White Splendour’ and ‘Blue Shades’ Anemones, all of which are ideally suited to growing in the wild or in orchards and meadows in the natural English countryside. We also planted many different varieties of tulips to add colour to the borders including ‘Apricot Fox’, Queen of Night’ and ‘White Triumphator, such as the below examples of the flowers which will hopefully grow from the bulbs planted. 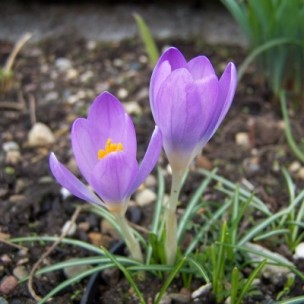 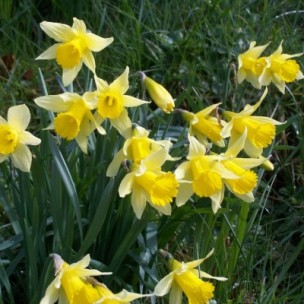 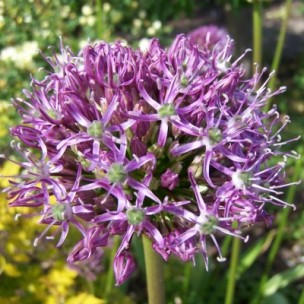 ‘The ‘Scented Collection’: comprising five different Narcissus varieties including the ‘Carlton’ ‘Cheerfulness’ and Flower Drift’ varieties, three different Hyacinth varieties, the ‘Christmas Pearl’ and ‘Album’ varieties of Muscari and the violet scented blue ‘Reticulata Iris’. These varieties were all chosen for their sweetly scented flowers and bright colours which will give a beautiful splash of colour to the Paradise Garden during the first months of Spring, as per below examples. 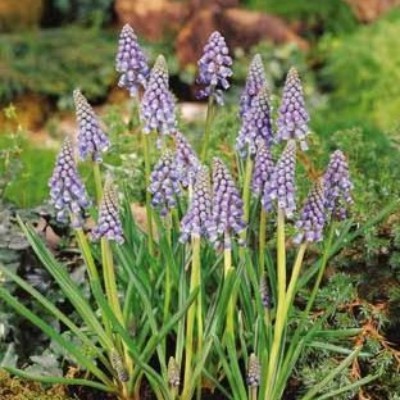 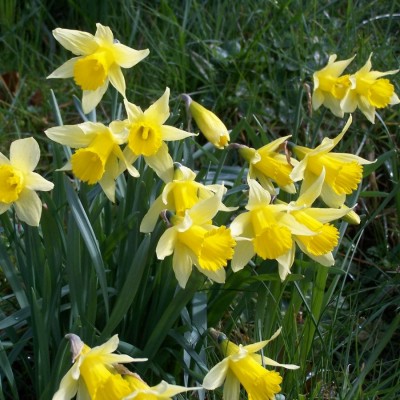 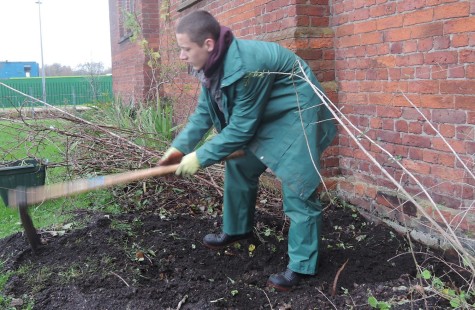 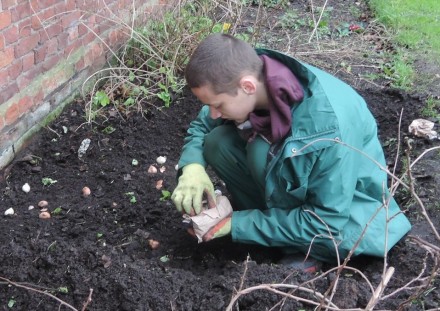 A selection of climbing roses were also planted over the winter which we hope will soon be climbing along the South and West walls of the church. We selected traditional varieties that flower often and that have strong fragrances to enhance the sweet scents which are a traditional element of ‘Paradise Gardens’. We also selected varieties that would be suitable for our often very wet and windy Salford climate! Varieties include the ‘Rosa Iceberg’, ‘Rosa Geoffrey Smith’, ‘Rosa Dublin Bay’ and ‘Rosa New Dawn’, such as examples below. 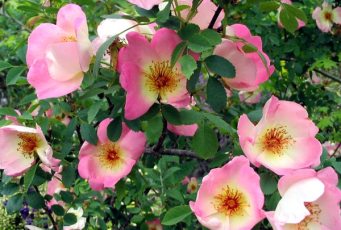 A particularly mild February proved to be an ideal time to plant new hedge shrubs and trees and transplant (move) any that would be better off situated in a different area. So a number of Espalier trees were successfully transplanted by volunteers Scott and Subhan to the North side hedge, because, although as although they were growing well situated against the South facing church wall there was a risk that the roots might be too close to the foundations. 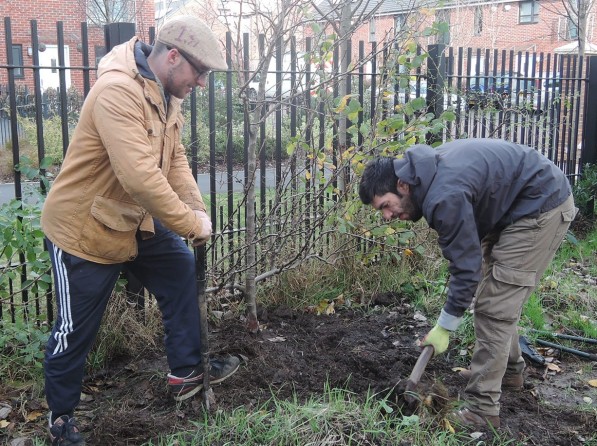 Choosing carefully, we selected a variety of shrubs and ornamental trees which fits our aim of creating a contemporary ‘Paradise Garden’ that is ‘bee-friendly’, providing nectar ad pollen throughout the growing season. The varieties include unusual and striking plants as well as more traditional varieties which are indigenous to the UK. As the ground was unusually warm during February as there was hardly a frost in sight we got together to plant the rooted, flowering trees and shrubs as detailed below with photo examples.

Deutzia ‘Codsall’; A tall, unusual looking deciduous shrub with interesting bark which is native to Japan and china. It has scented flowers which appear in the summer for a few weeks and fruits which are small, cup-shaped capsules which come into fruition during the winter.

Philadelphus x Lemoinei: A shrub which has bright green leaves and a profusion of white flowers.

Ribes Sanguineum: also known as ‘King Edward VII’, a shrub which has a strong fragrances and large drooping clusters of crimson flowers in the Spring. 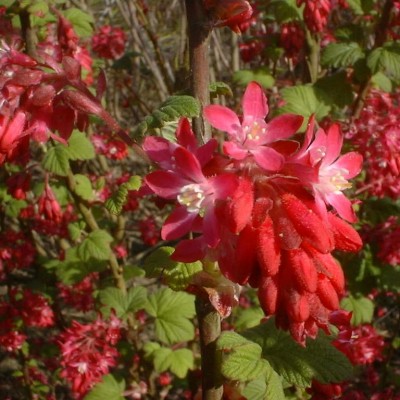 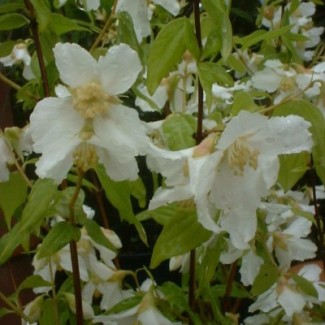 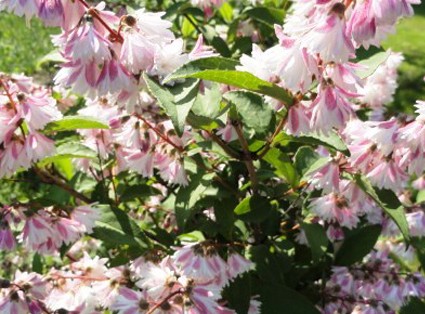 Planting a Privet Hedge Around Our Apiary

We decided that the area near our apiary alongside the nearby railings which overlook a public walkway would benefit from a privet hedge and make the area more secure by obscuring the view of our bee-hives from unwanted attention. This is because the bee hives have unfortunately been vandalised in the past with bricks thrown at the hives.

During February we planted twenty-five shrubs of the fast-growing evergreen Ligustrum Ovalifolium, also known as ‘Oval Leaved Privet’, which will be ideal with it’s thick, fleshy leaves that are green on the top, with a yellowy underside and white flowers that bloom in midsummer with a strong scent. We also planted an additional five Prunus Luscitanicus, also known as Portugal Laurel, another hardy privet.

We planted the shrubs in trenches that were dug using the double digging method, which will grow up the outside of the new apiary we will be constructing, to allow better access for more bee-keepers within our training and volunteer activities.

We planted the shrubs in trenches that were dug using the double digging method, a technique used to increase soil drainage and aeration involving the loosening of two layers of soil and the addition of organic matter. This method is typically done when cultivating soil in a new garden, or when deep top-soil is required.

First the top layer is dug off with a spade, forming a shallow trench, and then the under-layer (at the bottom of the trench) is dug with a fork or ‘pick’, breaking up the lower layer with organic matter such as compost or horse manure (which is what we used) added to the soil.

You can also add any other minerals like gypsum or phosphorus which may be required added into the trench with the manure.

A second trench is then started, backfilling the first trench. This process is repeated until the whole bed has been treated. There will be soil left over from the first trench, which is used to fill the last trench.

The final removal of the scaffolding that has shrouded the entire east end of the church has left the area looking like a derelict building site. However, come the Spring this gives us a ‘blank canvas’ and plenty of opportunities for new planting schemes. Much of the work that has been done over the winter months, particularly the planting of winter bulbs, won’t be noticeable until the Spring and Summer months when we hope to enjoy the lovely flowers that will hopefully bloom, providing nectar and pollen for our bees as well as a splash of welcome colour to the garden.